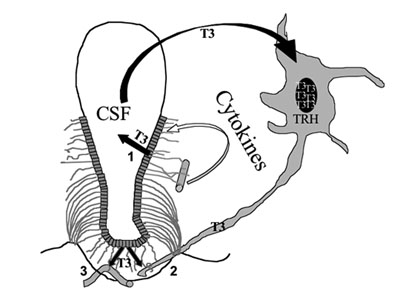 Fig. 32. Proposed mechanism for D2-regulation of the hypothalamic-pituitary-thyroid axis following the administration of LPS. LPS increases D2 activity in tanycytes resulting in increased T4 to T3 conversion. [1] T3 is released from tanycyte apical processes into the CSF for conveyance to the paraventricular nucleus, or [2] taken up from hypophysiotropic TRH axonal processes in the median eminence and transported retrogradely back to its cell body in the paraventricular nucleus. [3] T3 may also be released into the portal capillary system and directly inhibit the secretion of TSH. Local tissue hyperthyroidism inhibits TRH in the paraventricular nucleus. (From Lechan, R. M.; Fekete, C., Role of thyroid hormone deiodination in the hypothalamus.Thyroid2005, 15, (8), 883-997.)