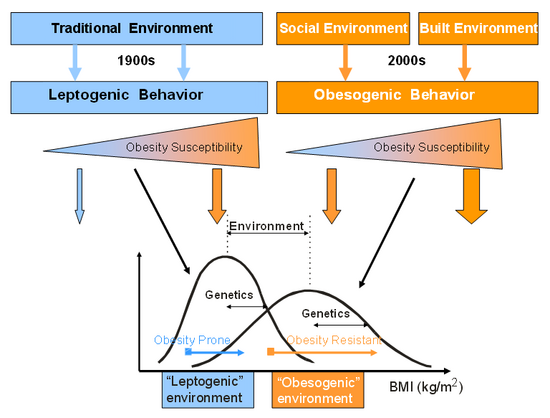 Figure 2. This figure depicts the potential effect of genes and environment on adiposity assessed here by body mass index (BMI). Some of the concepts described in this figure was recently proposed by Bouchard et al (59). Our environment has evolved over the past century from a “traditional” environment to a new “westernized” environment. On the left part of the figure is presented the long lasting “traditional” environment in which food is rather scarce and energy expenditure is high mostly related to occupational physical activity. Such an environment leads to “leptogenic” behaviors in which the variability of BMI will be dependent upon the genetic propensity to weight gain of individuals. On the right part of the figure, the more recent modern “social” and “built” environment leads to obesogenic behaviors characterized by plenty of cheap high calorie density food and little need for physical activity in which the variability in BMI will also depend upon the genetic propensity to weight gain of individuals. Compared to the “obesogenic” environment, the distribution of BMI will have a higher mean and higher standard error than that in the “leptogenic environment. Such a paradigm can be applied to populations with similar genetic background living in drastically different environment like the Pima Indians in Arizona and in Mexico (60).