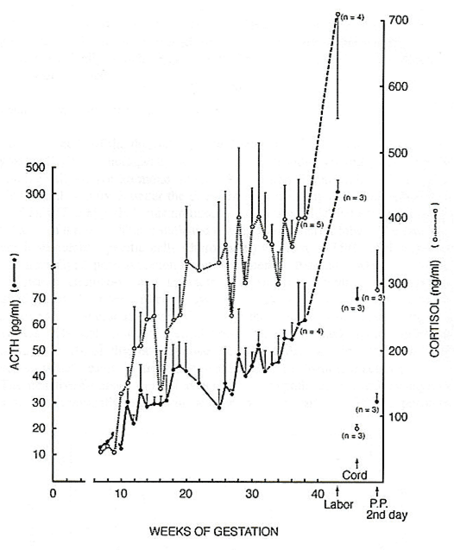 FIGURE 3. Plasma concentrations of adrenocorticotropic hormone ( ACTH ) and cortisol during normal pregnancy. Blood samples were obtained from five normal pregnant women weekly at 8:00 to 9:00 AM and from three women during labor and on the second postpartum day. In addition, umbilical cord plasma was obtained from the newborn infants of three of these subjects. The mean plasma concentrations for ACTH are denoted by the solid circles, whereas plasma cortisol levels are denoted by open circles. The vertical bars correspond to the magnitude of the standard error of the mean. ( From Carr BR, Parker Jr CT, Madden JD, et al. Maternal plasma adrenocorticotropin and cortisol relationships throughout human pregnancy. Am J Obstet Gynecol 1981;139:416. )