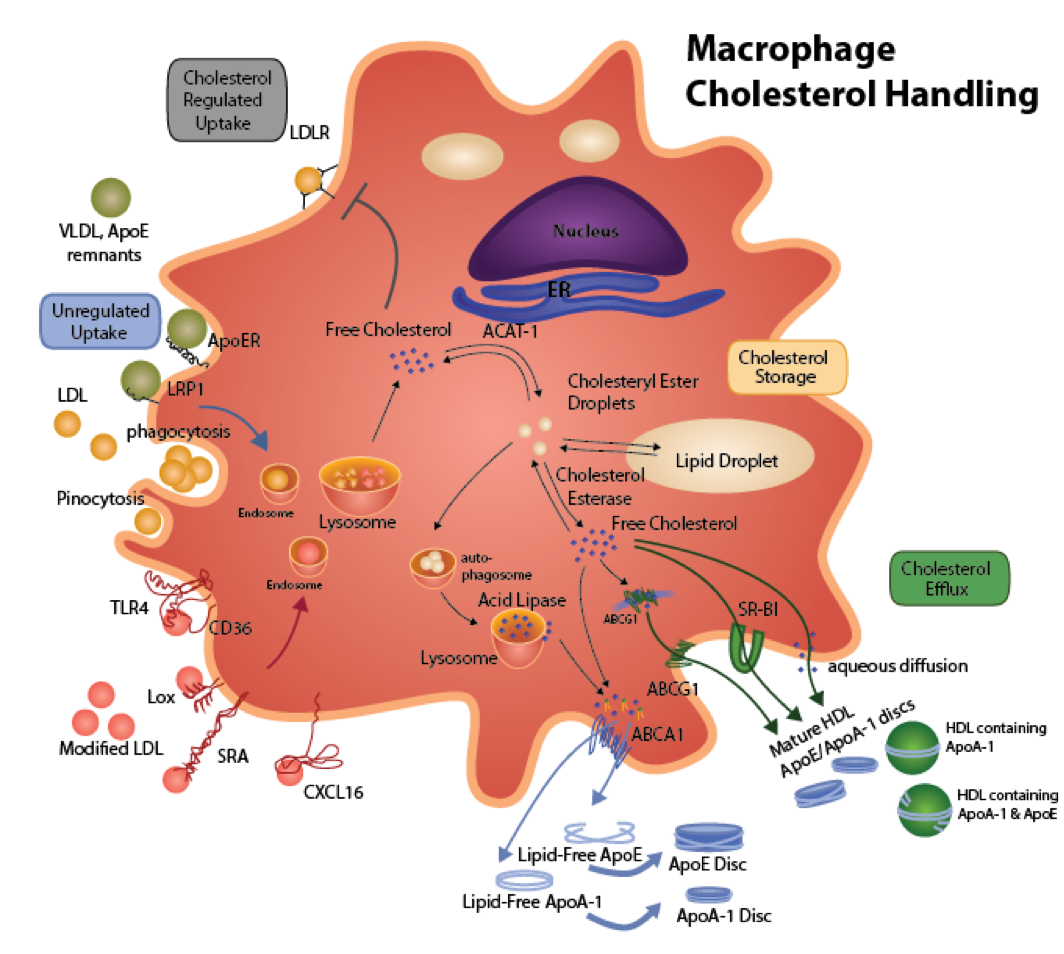 Figure 2. Macrophage Cholesterol Metabolism. Native LDL is recognized by the LDL receptor (LDLR). The LDL is endocytosed and trafficked to lysosomes, where the cholesteryl ester (CE) is hydrolyzed to free cholesterol (FC) by the acid lipase. The FC is transported to the endoplasmic reticulum (ER) to be esterified by acyl CoA:cholesterol acyltransferase (ACAT). Increased FC in an ER regulatory pool initiates a signaling cascade resulting in down-regulation of the LDL receptor. Cholesterol regulation of the LDLR prevents foam cell formation via this receptor in the setting of hypercholesterolemia. ApoB containing lipoproteins that also contain apoE (apoE remnants, VLDL) can cause cholesterol accumulation via interaction of apoE with apoE receptors including the LRP1 and the VLDL receptor, which are not regulated by cellular cholesterol. Uptake of native LDL by fluid phase pinocytosis may also contribute to foam cell formation. Modifications of apoB containing lipoproteins induce significant cholesterol accumulation via a number of mechanisms. Enzyme-mediated aggregation of apoB lipoproteins enhances uptake via phagocytosis. Oxidation and/or glycation enhances internalization via a number of receptors that are not regulated by cholesterol, including CD36, scavenger receptor A (SRA), lectin-like receptors (LOX), and toll-like receptors (TLR4). The CE generated by ACAT is stored in cytoplasmic lipid droplets, where there is a continual cycle of hydrolysis to FC by neutral cholesterol esterase and re-esterification by ACAT. Cytoplasmic CE is cleared by two main pathways. In one pathway, removal of FC from the plasma membrane stimulates transport of FC that has been generated by neutral cholesterol esterase away from ACAT to the plasma membrane. Alternatively, cytoplasmic CE is packaged into autophagosomes, which are transported to fuse with lysosomes, where the CE is hydrolyzed by acid lipase and the resulting FC is then transported to the plasma membrane. The efflux of FC to lipid-poor apolipoproteins or HDL occurs by a number of mechanisms to reduce foam cell formation. Exogenous lipid-free apoA-I or endogenous apoE that is produced by the macrophages interacts with ABCA1 to stimulate the efflux of phospholipid and FC to form nascent HDL particles (e.g. apoA-I or apoE containing phospholipid discs). ApoE produces the most buoyant, FC-enriched particles. ABCA1 plays a major role in the clearance of cytoplasmic CE via autophagy. The apoA-I/apoE discs as well as mature HDL containing apoA-I and/or ApoE stimulate FC efflux via three major mechanisms including ABCG1, SR-BI, and aqueous diffusion. ABCG1 may also play a role in the intracellular trafficking of cholesterol.