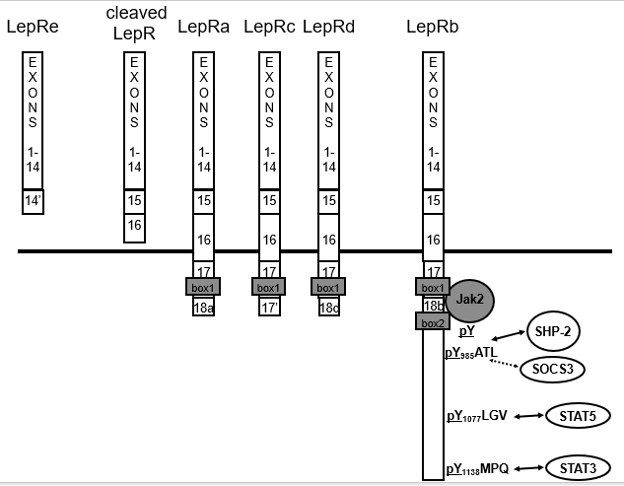 Figure 2. LepR isoforms and signaling. LepRa (Ra) represents the mostly highly expressed short form of LepR; LepRb (Rb) is the long form. Exon 17 contains half of a Jak docking site (BOX1) common to Ra, Rb and Rc, while exon 18b contains additional motifs required for full Jak2 binding (BOX2) and STAT3 signaling (31,33). Circulating leptin binding protein consists of extracellular domain that has been cleaved from the cell surface, along with the LepRe splice variant that lacks a transmembrane domain. Humans do not generate the splice variant, so that all LepRe is produced by cell surface cleavage, presumably by membrane associated metalloproteases (33). LepRa, -c, -d and the other so-called “short” isoforms contain the same first 17 exons as LepRb, but diverge within the intracellular domain. LepRb is the only isoform that mediates classical Jak-STAT signaling, as this isoform alone contains the motifs required to interact with Jak2 and to bind STAT proteins for downstream signaling (Figure 1) (34). While the function of LepRb is clear, the functions of the short isoforms are not, although they have been speculated to function in leptin transport into the brain and/or a source of cleaved, circulating extracellular LepR (which, along with LepRe comprises the major circulating leptin-binding protein) (35).